What happens when the income tax declaration return late? There are consequences to filing a late statement. The penalty will depend on whether you declare voluntarily or because the Treasury requires it. But it also depends on how long it takes you to regularize the situation.

Therefore, if you have forgotten or missed the date of filing a tax return, you should read this article to mitigate possible surcharges, penalties and other annoyances.

How is it done?

To file an untimely declaration you must follow the same procedure as for filing within the time limit.

Remember that self-employed workers may do so on paper or electronically through the electronic headquarters of the AEAT. Companies can only present it by Internet, with a digital certificate.

If the declaration is to be paid, you can do so by debiting the account, obtaining the NRC (Complete Reference Number). You can also request a postponement of the debt. But remember that the Treasury has tightened the conditions for granting them.

For late filing, you will be penalized. They will depend on whether you declare voluntarily or because the Treasury requires it. But also on how long it takes you to regularize the situation.

If you do not file a return within the deadline, you will receive a notification from the Tax Office requiring you to file it or a justification for not doing so. Normally, if you are obliged to present a return and you do not do so, the Tax Authorities will find out within a period of less than 6 months.

Penalty proceedings will also be initiated. In other words, you will have to pay the amount of the declaration, the interest on arrears and the corresponding penalty, which can range from 50 to 150% of the total debt.

To avoid penalties, you can take the first step and voluntarily submit the late declaration. In this case, you will only have to pay the amount of the debt plus a surcharge that will always be less than the amount of the penalties.

Late declaration without prior notice

The key to paying less for that extemporaneous declaration that comes out is to be the one who presents it before the Treasury sends you a requirement. This way, you will face a surcharge (established in Article 27 of the General Tax Law) and not a penalty.

Once the tax return has been filed out of time, the tax authorities will notify you of the settlement of the surcharge for late filing.

The amount of the late filing surcharge depends on the time that has elapsed between the last day of the established period and your voluntary return.

Thus, if you file your return:

- Within 3 months of the end of the established period: the surcharge will be 5% of the amount of the declaration, without interest for late filing or penalties.

- Between 3 and 6 months after the end of the established period: the surcharge will be 10% of the amount of the declaration, without interest for late payment or penalty.

- Between 6 and 12 months following the end of the established period: the surcharge will be 15% of the amount of the declaration, without interest for late payment or penalty.

- After 12 months: the surcharge will be 20%. There will be no penalty, but there will be interest for late payment from the day following the end of the 12 months until the declaration is submitted.

In addition, provided that:

1. the amount of the late declaration has been paid (or the granted postponement has been properly attended to)

2. and the notified surcharge is entered in the voluntary period

the surcharge for late declaration will be reduced by 25% (article 27.5 LGT). 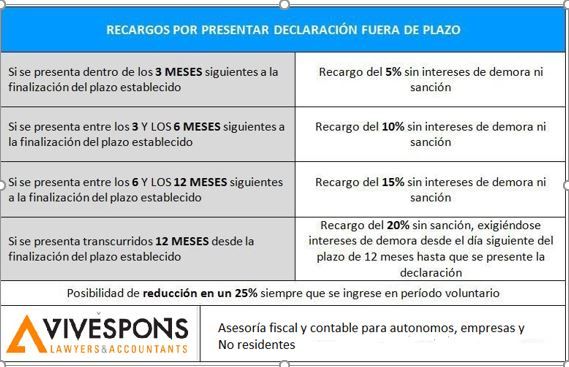 Example of the calculation of the surcharge for late declaration

Imagine that you forget to file your VAT return for the third quarter of this year (the deadline was 20 October). You immediately do the calculations and see that you get 1,000 euros.

If you pay the surcharge within the period granted by the tax authorities in the notification, it will be reduced by 25%, so you will only have to pay 37.50 euros.

If the tax authorities send you a request for a return that has not been filed, it is best, in order not to aggravate the situation further, to file it.

Immediately, a sanctioning procedure will be initiated.

If the tax return is paid, the offence committed is regulated in article 191 of the LGT: failure to pay all or part of the tax debt within the time limit established in the regulations for each tax.

This offence carries a penalty of between 50 and 150% of the total debt and can be graduated:

- if economic damage has been caused to the Treasury

- if other tax offences have been committed repeatedly.

It can also be applied to you:

Reduction for compliance: 30% reduction if you accept the sanction imposed.

Reduction for payment: 25% reduction (once the reduction for compliance has been applied, if applicable) if the sanction is paid within the voluntary payment period indicated in the notification.

You realise that you did not submit the VAT return for the third quarter on time (which comes out to 1,000 euros) but you decide to do nothing. On the 5th of

January of the following year, you receive a notice from the IRS requiring its submission. You file and pay it on January 10th.

Calculation of the penalty:

We see that the penalty can be reduced to almost 50% of that initially set. But

it is much better to pay a 37.50 euro surcharge for filing a voluntary late return than 262.50 euro if the tax authorities require it.

What if the late return is returned, zero or informative?

The surcharges for late filing without prior requirement established in article 27 of the LGT are only applied when the return is due.

If the return is to be returned, to be compensated, zero or is informative, there is no economic damage to the Tax Authorities.

In this case, article 198 of the GLT states that the infringement for not presenting these declarations on time will be slight. The penalty will be a fine of EUR 200.

The fine will be EUR 400 if the census declarations are not submitted in time.

If the late declaration is informative, the penalty will be 20 euros for each data or set of data that refer to the same person or entity, with a minimum of 300 euros and a maximum of 20,000 euros.

If you submit the untimely declarations that are not paid without a prior request from the Treasury, the penalties will be reduced by half (article 198.2 LGT).

Example of filing a late declaration without result to pay

On 2 November you realise that you have not submitted the VAT return for the third quarter for which the deadline was 20 October.

When you calculate it, it comes out to offset 1,000 euros. You present it immediately.

The tax authorities will not be able to settle the surcharge in article 27 of the LGT because there is no amount to be paid.

It will start a sanctioning procedure and will impose a penalty of 200 euros which will be reduced to 100 euros for presenting it without a previous requirement.

If you pay the sanction within the period established in the notification, a reduction of 25% will be applied, so you will only pay 75 euros.

In any case, to avoid paying surcharges or penalties, it is best to hire our tax consultancy services.

We offer you the peace of mind of complying with your tax obligations. Now that the UK has officially left the EU, those of you living...

There are consequences to filing a late statement. The penalty... Many see the self-employed as a way out of the much-desired "freedom... This year, the self-employed will have to follow the... This year, the self-employed will have to follow the economic...